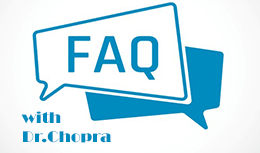 Hello and welcome to Frequently Asked Questions. We are joined today by Dr. Sanjeev Chopra. Let's get into some questions from the session, A Perfect 10: Five ways to live longer and five keys to lasting happiness. First, the studies asserting health benefits of coffee are mostly epidemiological. How much confidence can we have in them?

That's a great question. There'll never be a randomized, double-blinded, placebo-controlled study on coffee. We're not gonna take 20,000 individuals and at a certain age, say 18, say, "Hey 10,000 of you are the lucky ones who get to drink coffee for the next 30 years, and the other 10,000, hey, not even allowed to look at the stuff. Then we're gonna follow you for 20 years and see if there's a difference in health outcomes." So what we have are epidemiological studies. But if there are multiple epidemiological studies, if there's a dose-dependent effect, if there are mechanistic explanations, then we have to give credence to them.

So I got intrigued some 20 years ago when I first heard and read in Gastroenterology that coffee drinkers had low levels of liver enzymes. "Hmm is coffee here bad or protective?" Then we saw studies coming out, they have less fibrosis, scarring of the liver. Then if you drink two cups of regular coffee a day, 50% reduction in hospitalization and mortality from chronic liver disease. You know, a billion people in the world have chronic liver disease. Drinking two cups, regular coffee, 50% reduction hospitalization and mortality? And then primary liver cancer, which is cancer arising in the liver, is now the third leading cause of cancer mortality in the world. In 11 countries, including Egypt and Mongolia, it's the number one cause of cancer mortality. And if you drink two cups of regular coffee a day, a 40% reduction.

Also a dose-dependent effect. So we've been always intrigued, how come there are people who drink a pint of whiskey a day, a liter of wine a day for 20 years, 30 years, at the end, only 20% are cirrhotic? What happened to the other 80%? And we used to think it's genes or the enzyme that metabolizes alcohol, alcohol dehydrogenase. It turns out it's coffee. If you drink that much alcohol and drink one cup of coffee a day, 20% reduction in alcoholic cirrhosis, two cups, 40%, four cups, 80%. So, dose-dependent effect, multiple, multiple studies, and then mechanistic explanations. Coffee drinkers have low levels of TNF-alpha, C-reactive protein, they have high levels of plasma adiponectin. Low levels of plasma adiponectin linked with aggressive liver disease. And then, of course, the most intriguing, if coffee is having all these amazing effects on liver disease, but also protecting against six other common cancers, diabetes, Parkinson's, cognitive decline, dementia, what about the holy grail? Do people who drink coffee actually live longer? And now they have at least four studies. Men and women who drink coffee live longer, lower total and cause-specific mortality.

Elizabeth Blackburn, a brilliant Australian scientist, in 2009, with two other colleagues, got the Nobel Prize in Medicine for discovering and describing telomeres and telomerase. Telomeres are at the end of our chromosomes. They prevent fraying of the chromosomes and chromosomes sticking to each other. And shortened telomeres are linked to accelerated cellular aging. We think people with shortened telomeres will live for 8-10 years less. Who are these people? Caregivers of people with Alzheimer's, mothers of chronically severely disabled children, they're stressed day-in, day-out. Who has longer telomeres? People who exercise, people on the Mediterranean diet, people who meditate and, amazingly enough, people who drink coffee. So this is from the Nurses Health Study, and what it showed is very interesting. Increased caffeine intake is linked to shortened telomeres. Increased coffee intake is linked to lengthened telomeres. So, it's not the caffeine. Caffeine can be bad. It's the many, many different constituents in coffee.

Does tea have similar health benefits as coffee?

It's not known, there are very limited studies. I'm aware of one study suggesting that people who drink tea have less carotid calcification. So the carotid artery in the neck. By inference, that may protect against stroke. I am aware of one study that suggested tea-drinkers have some protection, level of protection, against liver disease. I have many, many, many friends who drink tea and don't drink coffee. And when I speak about the health benefits of coffee and show all the studies, they almost get militant. "Dr. Chopra, you didn't say anything about tea." So I mentioned these two studies and then I tell them, "You know, there's a saying in science and medicine, 'The absence of evidence is not evidence of absence.' It may turn out that tea has similar benefits, or even better. The studies haven't been done. For the time being, I recommend you drink coffee." And they meet me often a year or two later and invariably, they come up and smile. Say, "Dr. Chopra, you'll be happy to know I'm drinking two cups of coffee now." So, tea, we don't have proven benefits.

How much of one's happiness is inherited?

This is a study that's based on looking at monozygotic twins and comparing them to dizygotic twins. And what it says is that we have, just like we have an intelligence quotient, IQ, EQ, emotional, we also have a happiness quotient. And the happiness quotient is equal to 50% is your setpoint, what you inherit from your parents and grandparents. 50%. Astoundingly, only 10% is living conditions. As long as you have a roof and running water, whether you live in a mansion in Beverly Hills or the slums of Calcutta or the shanty towns of. 10% living conditions. 40% voluntary action, what we do to be of service, to mentor, to nurture, to be charitable. So that's within our power. But even the 50% which is inherited is fluid. And we know that. Exercise will get you out of a funk, will get you out of depression, behavioral cognitive therapy, meditation, and very importantly, expressing gratitude.

Robert Emmons, considered a father of modern positive psychology, has written a wonderful small book. It's called 'Thanks: How the Science of Gratitude Shows Us We Can Live Longer, We Can Be Happier'. So, a very simple phenomenon. If you do that on a regular basis for six weeks, that setpoint... Expressing gratitude, writing down two or three things you're grateful for at the end of the day for six weeks, setpoint goes up by 25%. So, it's easy for us to be happy. But happiness is more than the sum total of happy moments. And my contention is that the happiest people on this planet have four things in common. They have friends, they have the ability to forgive, don't hold a grudge, bitterness. They do things for others. 3Fs: Friends, forgiveness, for others. One G: Gratitude. But happiness is more than the sum total of happy moments, and in order for us to have sustained happiness, we have to find our purpose and live it.

Mark Twain once famously said, "The two most important days in your life are the day you're born, and the day you find out why." Each one of us has a singular purpose in life. That happens to be the title of my most recent book, 'The Two Most Important Days: How to Find Your Purpose and Live A Happier and Healthier Life'. I wrote it with a friend and colleague, Gina Vild. She's our Associate Dean of External Communications at Harvard Medical School, and a very dear family friend.

Lastly doctor, can you go over the Harvard Grant Study on adult development?

Yeah. This is an amazing study. I don't think there'll ever be a study like this. This started almost 80 years ago. Can you imagine a study that started, and is still ongoing? And they took about 350-400 kids from Harvard, but also a few hundred from poor parts of Boston, Dorchester and Roxbury. So they're all men, they're all white men in the study, and they've been followed. 19 or so were still alive a year ago at age 91. So detailed questionnaires, then physical examinations, then blood tests, CRP, cholesterol, EEG, functional MRI, then home visits, interviews of the spouses, and now a cohort of their children are being followed in a study.

Now what is the major conclusion of the study? The major conclusion of the study is that loneliness is toxic. Loneliness is toxic, and that your relationship... Your satisfaction with relationships with friends at age 50 is a better predictor of health, happiness, and longevity at age 80. Three decades later. Better than what? Better than your cholesterol, your blood pressure. So I tell my students, residents, fellows, colleagues, I say, "Yeah, I know you're busy, you have 15 minutes to see a patient. But at the end of the visit, ask them about their friends. What do you do to celebrate with your friends? Point them to this TED Talk. Encourage them to celebrate everything, small and big, with their friends. Your friends are your chosen family.

Robert Louis Stevenson once said, "A friend is a gift that you give to yourself." Khalil Gibran said, "Friendship is a sweet responsibility, never an opportunity." And Jim Rohn, best selling author once said, "You're the average of the five people you spend the most time with." Choose your friends carefully, celebrate everything with them.

Wow, this is great information doctor. Thank you so much for your time today.