James R. Gavin III, MD, PhD is clinical professor of medicine at Emory University School of Medicine in Atlanta, Georgia, and Clinical Professor of Medicine at the Indiana University School of Medicine, Indianapolis, Indiana. He currently serves as Chief Executive Officer and Chief Medical Officer of Healing Our Village, Inc. Prior to this, he served as president and chief executive officer of MicroIslet, Inc., San Diego, California, and was president of the Morehouse School of Medicine in Atlanta. He served as senior scientific officer at the Howard Hughes Medical Institute (HHMI) and as director of the HHMI–National Institutes of Health Research Scholars Program. Before joining the senior staff of HHMI, Dr Gavin was a professor and chief of the Diabetes Section, and William K. Warren Professor for Diabetes Studies at the University of Oklahoma Health Sciences Center, Oklahoma City, Oklahoma. He previously served as an associate professor of medicine at Washington University School of Medicine in St. Louis, Missouri. Dr Gavin belongs to a number of organizations, including the National Academy of Medicine (formerly the IOM), the American Diabetes Association (ADA), the American Association of Clinical Endocrinologists (AACE), the American Society of Clinical Investigation (ASCI), and the American Association of Physicians (AAP). He is a past president of the ADA and was voted Clinician of the Year in Diabetes by the ADA in 1991. He has served on many advisory boards and on the editorial boards of the American Journal of Physiology and the American Journal of Medical Sciences. He is on the board of trustees for Emory University, Livingstone College, and Trustee Emeritus for the Robert Wood Johnson Foundation. He is immediate past national program director of the Harold Amos Faculty Development Program of the Robert Wood Johnson Foundation, past chairman of the National Diabetes Education Program (NDEP), serves as chairman of the Data Safety Monitoring Board for the VA Cooperative Diabetes Study (VADT), and is Chair of the Advisory Committee to the Associate Director of Intramural Research of the NIDDK. He also serves as Chairman of the Board for the Partnership for a Healthier America. Dr Gavin has published more than 250 articles and abstracts in such publications as Science, Journal of Applied Physiology, Diabetes, and the American Journal of Physiology. He is coauthor of two books: Healing Our Village: A Self-Care Guide for Diabetes Control (written with L. Coleman), and Dr. Gavin’s Health Guide for African Americans (written with S. Landrum). He has received the E.E. Just Award, the Herbert Nickens Award, the Daniel Savage Memorial Award, the Emory University Medal for Distinguished Achievement, the Banting Medal for Distinguished Service from the ADA, the Distinguished Alumni Award from the Duke University School of Medicine. He was named a "Living Legend in Diabetes" by the American Association of Diabetes Educators (AADE) in 2009, and was named one of the "175 Emory History Makers" on the occasion of the celebration of the University’s 175th Anniversary, and In 2015, he received a Lifetime Achievement Award for Diabetes Research from ADA, and the Lifetime Meritorious Achievement Award from the NMA. He graduated from Livingstone College in Salisbury, North Carolina, with a degree in chemistry, earned his PhD in biochemistry from Emory University and his MD degree from Duke University School of Medicine, Durham, North Carolina. 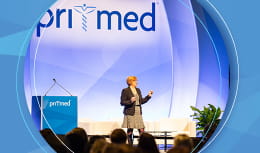 8:40 AM - 9:25 AM Close to the Heart: The Importance of Recognizing Cardiovascular Risk in Type 2 Diabetes