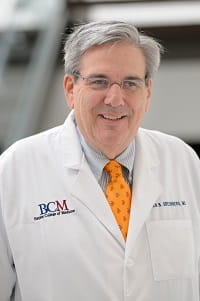 Since 1974, Dr. Greenberg has assumed many leadership roles within Baylor College of Medicine: chief of General Medicine Section at Ben Taub Hospital (1986 - 1989) and chief of Medicine Service (1990 - present), associate chair of the Department of Medicine (1999 - 2002), acting chair of the Department of Medicine (2002 - 2004), and chair of the Department of Medicine (2004 - 2006). He received the John P. McGovern Outstanding Clinical Teacher Award at Baylor in 1995 and the Baylor Alumni Award in 1999. In 2013, Dr. Greenberg was awarded the Barbara and Corbin J. Robertson Jr. Presidential Award for Excellence in Education, which is Baylor’s most prestigious award for faculty education service. He has been listed among the Best Doctors in America in 1997, 1998, 2002, 2005-2006, 2007-2008, 2009-2010 and 2012. Dr. Greenberg holds the Herman Brown Teaching Professorship (1990 - present). In 2002, he was appointed Distinguished Service Professor at Baylor College of Medicine. His many awards and honors include membership in the Alpha Omega Alpha honor society, Master of the American College of Physicians, American College of Physicians Texas Chapter Laureate, and fellow of the Infectious Diseases Society of America.

Expert Debate: Marijuana Legalization: For or Against? (Recorded at Pri-Med Southwest)