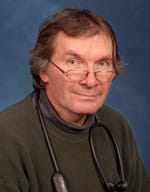 Dr. Sal Mangione is a clinician-educator with a long interest in Physical Diagnosis, Medical History and community service. After obtaining his MD summa cum laude from the Catholic University of Rome, Dr. Mangione trained in Internal Medicine and Pulmonary and Critical Care Medicine at the Medical College of Pennsylvania, before eventually moving to Jefferson Medical College where he is currently Associate Professor of Medicine, Associate Program Director for the Internal Medicine Residency, Director of the second year Physical Diagnosis Course, and coordinator for the History of Medicine lecture series and the Jefferson Medical Cineforum. Dr. Mangione’s innovative programs and engaging teaching style have been recognized by multiple awards for excellence in clinical teaching, including the 2005 Golden Apple Award, the 2006 Jefferson Portrait Presentation, and the 2009 Lindback Award. His work has also been featured in the New York Times, the Los Angeles Times, the Wall Street Journal, the BBC, CNN and NPR. (The New York Times, July 13, 1999) In the 1990s Dr. Mangione published a series of landmark articles on the decline of basic clinical skills like auscultation among primary care trainees. This launched an interest in rekindling the bedside, which eventually led to the introduction of objective assessment during both the National Board of Medical Examiners (NBME) test and also during the American Board of Internal Medicine (ABIM) certification exam. Dr. Mangione collaborated with the ABIM on several research projects related to physical diagnosis, and also served on the ABIM committee that developed a Physical Examination Module for the Internal Medicine recertification exam. He also served on the NBME committee that finalized the Clinical Skills Exam, and has contributed the physical diagnosis chapter for the 14th edition of the American College of Physicians MKSAP. Dr. Mangione has lectured extensively on bedside diagnosis, both nationally and internationally, including England, Canada, South America and New Zealand. He has been an invited speaker at many national and international meetings and multitudes of medical Grand Rounds, especially in regard to the role of visual arts as a way to teach bedside observation. He’s also the author of an audio-CD on chest sounds and of the book Secrets in Physical Diagnosis, which has now entered its 2nd edition, has been translated in six languages, and was hailed as “one of the more ‘fun’ books to read” by Doody Review Services. In addition to his interests in clinical skills and medical history, Dr. Mangione has also been actively involved in asthma education, creating (and directing for six years) a unique and innovative vehicle: The AsthmaBUS? -- a red, double-decker Bus that he bought in London in 1999, shipped to Philadelphia, and eventually outfitted so to provide asthma education and screening for 15,000 Philadelphia middle-school children. For this he received a community service award from the City of Philadelphia, the 2001 American Institute of Architects Award for most innovative exhibit, and the 2004 Presidential Award by the American College of Chest Physicians. Dr. Mangione was also part of Dr. Hojat’s original team that developed the Jefferson Empathy Scale, and he has maintained an active interest in rekindling empathy through the humanities. To this end, he has created a Jefferson History of Medicine course and a Medical Cineforum. He’s now at work to develop a theater program, so to foster empathy by having students participating in acting and theatrical performances.