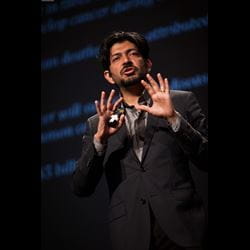 Siddhartha Mukherjee is a pioneering physician, oncologist, and author who has redefined our public discourse on human health, medicine and science. A profoundly influential voice in the scientific community, he is best known for his books, The Emperor of All Maladies: A Biography of Cancer, which earned him the 2011 Pulitzer Prize, and The Gene: An Intimate History which won international awards and was recognized by The Washington Post and The New York Times as one of the most influential books of 2016. His published works exhibit an outstanding literary skill that has left an indelible mark on our culture, as The Emperor of All Maladies has been adapted into a documentary by filmmaker Ken Burns, and was included among Time magazine’s 100 best nonfiction books of the past century.