Anne L. Peters, MD, is a professor of clinical medicine at the Keck School of Medicine of the University of Southern California and the Director of the USC Clinical Diabetes Programs. She runs diabetes centers in Beverly Hills and in underserved East Los Angeles. In addition to her clinical work, she has been a PI on multiple grants and has written over 200 abstracts and publications and 4 books. Her major interests involve translating research findings, from lifestyle interventions to technology, to people with diabetes throughout the socioeconomic spectrum. She has been part of the writing groups for the ADA guidelines for the treatment of both type 1 and type 2 diabetes, is a member of the EASD/ADA Device Safety committee and the Chair of the Endocrine Society Technology Guideline Writing Group. She was presented with the ADA "Outstanding Physician Clinician" award, the Bernardo Alberto Houssay Award from the National Minority Quality Forum and has been listed on the "Best Doctors in America" continuously since 2001. 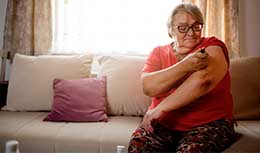 A Holistic Approach to Diabetes Care: Reducing HbA1c and Weight with Emerging Pharmacotherapies