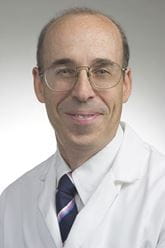 Dr. Byron Thomashow is a Professor Emeritus at Columbia University Vagelos College of Physicians and Surgeons and a Special Lecturer at NewYork-Presbyterian/Columbia University Irving Medical Center. He spent many years as a Professor of Medicine and an Attending Physician at that institution. He was the medical co-director of the Jo-Ann LeBuhn Center for Chest Disease at Columbia University Irving Medical Center and medical director of the NewYork-Presbyterian Lung Volume Reduction program. He chaired the Respiratory Disease Council of the NewYork-Presbyterian Healthcare Network for many years, and co-chaired the NewYork-Presbyterian smoking cessation initiative leading to campus going smoke-free. The Byron M. Thomashow Professorship of Medicine at Columbia University Vagelos College of Physicians and Surgeons was established in his honor in 2006. Dr. Thomashow helped found the COPD Foundation in 2004 and served as Chairman of the Board of Directors for ten years. As of July 2018, he took on the role of Chief Medical Officer of the Foundation. He was awarded the 2013 American Thoracic Society Public Advisory Roundtable Excellence Award. In 2016, he received the Columbia University Leonard Tow Humanism in Medicine Award sponsored by the Arnold P. Gold Foundation. In 2017, he received the Albert Nelson Marquis Lifetime Achievement Award and in 2018 received the JWWalsh Visionary Award from the COPD Foundation. He received the Milstein Service Award from Columbia University and NewYork-Presbyterian Hospital in 2022. He was a member of the steering committee and the co-primary investigator at the Columbia site for the National Emphysema Treatment Trial and has been actively involved in multiple national clinical research projects including the development and validation of the CAPTURE tool (COPD Assessment in Primary Care to Identify Undiagnosed Respiratory Disease and Exacerbation Risk).