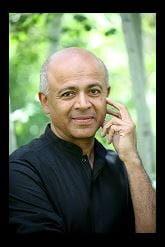 Dr. Abraham Verghese is a nationally bestselling author and a prominent voice in medicine with a uniquely humanistic view of the future of healthcare. He received the National Humanities Medal from President Obama, “for reminding us that the patient is the center of the medical enterprise.” His memoirs and novels on medical themes have sold millions of copies, topped bestseller lists, and earned major movie deals, while his New York Times articles arguing for greater focus on the physical patient have made waves in the medical community. His warmth and vision as well as his world-class gifts as a storyteller make him a powerful speaker both to healthcare professionals and the patient in all of us. Abraham sees a future for healthcare which marries technological innovation with the traditional doctor-patient relationship. He has a deep understanding of the new tools being placed in doctors’ and patient’s hands, but he also has a deep faith in the human hand itself as one of the most powerful tools in a doctor’s kit. He grounds his vision of technological progress in a humanistic commitment to listening to the patient’s story and providing what the patient most wants — a true caregiver. This dual-pronged approach, incorporating both an appreciation of tech developments and a profound commitment to the relationship between doctor and patient, makes Abraham a leading voice in the discussion about what quality care means now and in the future. In addition to being a deep thinker about the future of healthcare, Dr. Verghese is a phenomenally successful author with tremendous popular appeal. His most recent novel, Cutting for Stone, was a runaway hit, topping the New York Times bestseller list for over two years and earning a movie deal. His first book, My Own Country, a memoir about treating AIDS in rural Tennessee, was a finalist for the National Book Critics Circle Award for 1994 and was made into a movie. His second book, The Tennis Partner, was a New York Times notable book and a national bestseller. His upcoming novel, The Maramon Convention, is highly anticipated. Most recently, Dr. Verghese wrote the Forward to the current bestseller When Breath Becomes Air by Paul Kalanithi, a memoir by a young neurosurgeon faced with a terminal cancer diagnosis. Dr. Verghese is also well-known for his New York Times articles “Treat the Patient, Not the CT Scan” and “Restoring the Lost Art of the Physical Exam”, which coined the term “iPatient” for the electronic records which often receive more attention than the actual patient. He has published extensively in the medical literature, and his writing has appeared in The New Yorker, Sports Illustrated, The Atlantic Monthly, Esquire, Granta, The New York Times Magazine, The Wall Street Journal and elsewhere. Dr. Verghese has served on the faculty of many universities, including the University of Texas Health Sciences Center, San Antonio, where he was the founding director of the Center for Medical Humanities and Ethics. He has served on the Board of Directors of the American Board of Internal Medicine. He is a Master of the American College of Physicians, and was elected to the Association of American Physicians, as well as the Institute of Medicine of the National Academy of Sciences.